Re-posted from http://www.inconvenienttruths.net with thanks

"We are all born ignorant, but to stay ignorant is a choice."
Chinese proverb
"During times of universal deceit, telling the truth becomes a revolutionary act."
George Orwell
The Emperor's New Clothes 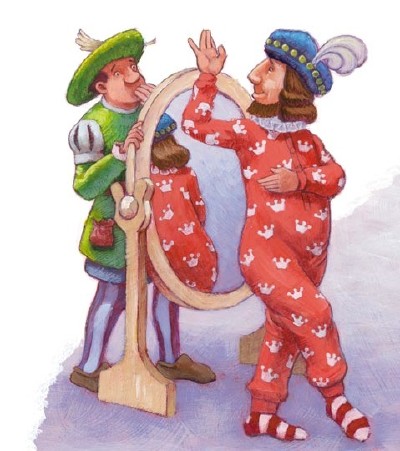 In Hans Christian Andersen's tale "The Emperor's New Clothes", the Emperor's subjects applauded his 'non-existent' magnificent new set of clothes, because they had been conditioned to believe whatever the Emperor and his officials told them, even to the extent of denying what they saw with their own eyes. It took an innocent child to declare: "The Emperor isn't wearing anything at all."
In our time, Americans have been conditioned - by official pronouncements, mainstream media repetition and public relations campaigns - to believe that verifiable events, even things they have seen with their own eyes, did not really happen. Lies and disinformation have replaced truth, and people have set aside their capacity to think critically, accepting explanations of events which are false, or even absurd.
This website challenges people to rediscover their critical thinking skills, and to look anew at the 'conventional wisdom' about some important issues and historical events that may conflict with reason and common sense, and to consider some inconvenient truths about America, and its role in the world.

"The news and the truth are not the same thing."
American journalist Walter Lippmann (1889-1974)
"To repeat what others have said requires education, to challenge it requires brains."
Mary Pettibone Poole
"We Americans are the ultimate innocents. We are forever desperate to believe that this time the government is telling us the truth."
Sydney Schanberg
"The dissenter is every human being at those times of his life when he resigns momentarily from the herd and thinks for himself."
Archibald Macleish, 1937
"America is the most destructive nation in history. We have overthrown more than 50 foreign governments; we have attempted to assassinate or have assassinated more than 50 foreign leaders; we have bombed more than 35 countries; we have interfered in the elections of dozens of countries."
William Blum, 2016
"I wouldn't call it fascism exactly, but a political system nominally controlled by an irresponsible, dumbed down electorate who are manipulated by dishonest, cynical, controlled mass media that dispense the propaganda of a corrupt political establishment can hardly be described as democracy either."
columnist Edward Zehr
"If you think any American official is going to tell you the truth, then you're stupid."
Arthur Sylvester, assistant secretary of defense for public affairs, to American journalists, 1965
"The United States has a long record of bombing nations, reducing entire neighborhoods, and much of cities, to rubble, wrecking the infrastructure, ruining the lives of those the bombs didn't kill. And afterward doing shockingly little or literally nothing to repair the damage."
General William McCoy, Army Corps of Engineers
"To learn who rules over you, simply find out who you are not allowed to criticize."
Voltaire
"American leaders are perhaps not so much immoral as they are amoral. It's not that they take pleasure in causing so much death and suffering. It's that they just don't care. The same that could be said about a sociopath. As long as the death and suffering advance the agenda of the empire, as long as the right people and the right corporations gain wealth and power and privilege and prestige, as long as the death and suffering aren't happening to them or people close to them, then they just don't care about it happening to other people, including the American soldiers. American leaders would not be in the positions they hold if they were bothered by such things."
William Blum
"It is difficult to get a man to understand something, when his salary depends on his not understanding it."
Upton Sinclair
"In America, we grew up thinking that the people that we see on the nightly news are journalists. But, there is no journalism happening there, only script reading. That is understood by anyone with a sliver of common sense, and the objectivity to realize that their newsperson is basically an actor."
Charlie Robinson, in his book "The Octopus of Global Control", 2017
"The question is not how to get good people to rule; the question is how to stop the powerful from doing as much damage as they can to us."
Karl Popper

"There is no such thing, at this date of the world's history, in America, as an independent press. You know it and I know it.
There is not one of you who dares to write your honest opinions, and if you did, you know beforehand that it would never appear in print. I am paid weekly for keeping my honest opinion out of the paper I am connected with. Others of you are paid similar salaries for similar things, and any of you who would be so foolish as to write honest opinions would be out on the streets looking for another job. If I allowed my honest opinions to appear in one issue of my paper, before twenty-four hours my occupation would be gone.
The business of the journalists is to destroy the truth, to lie outright, to pervert, to vilify, to fawn at the feet of mammon, and to sell his country and his race for his daily bread. You know it and I know it, and what folly is this toasting an independent press?
We are the tools and vassals of rich men behind the scenes. We are the jumping jacks, they pull the strings and we dance. Our talents, our possibilities and our lives are all the property of other men. We are intellectual prostitutes."

John Swinton, preeminent New York journalist, at a press banquet,1880
"The war against a foreign country only happens when the moneyed classes think they are going to profit from it."
George Orwell
"I hate those men who would send into war youth to fight and die for them; the pride and cowardice of those old men, making their wars that boys must die."
Mary Roberts Rinehart
"A populace deprived of the ability to separate lies from truth, is no longer capable of sustaining a free society."
Chris Hedges
"Democracy is dead in the United States and the forces of tyranny and authoritarianism offer no apologies for their hatred of democracy and the culture of poverty, immiseration, and cruelty that they want to impose on the American people, if not the rest of the world."
Henry Giroux
"I spent thirty-three years in the Marines, most of my time being a hlgh class muscle man for Big Business, for Wall Street and the bankers. In short, I was a racketeer for capitalism.
I helped purify Nicaragua for the international banking house of Brown Brothers in 1910-1912. I helped make Mexico and especially Tampico safe for American oil interests in 1914. I brought light to the Dominican Republic for American sugar interests in 1916. I helped make Haiti and Cuba a decent place for the National City [Bank] boys to collect revenue in. I helped in the rape of half a dozen Central American republics for the benefit of Wall Street.
In China in 1927 l helped to see to it that Standard Oil went its way unmolested.
I had a swell racket. l was rewarded with honors, medals, promotions. l might have given Al Capone a few hints. The best he could do was to operate a racket in three city districts. The Marines operated on three continents."
General Smedley Butler, former US Marine Corps Commandant, 1935
"Unchecked, rulers will always consolidate and centralize their control until there is nothing left for them to seize."
Joseph Plummer
"Many people, especially ignorant people, want to punish you for speaking the truth, for being correct, for being you. Never apologize for being correct, or for being years ahead of your time. If you're right and you know it, speak your mind, even if you are a minority of one. The truth is still the truth."
Mahatma Gandhi
"The Japanese pilots who bombed Pearl Harbor were being patriotic. The German people who supported Hitler and his conquests were being patriotic - fighting for the Fatherland. All the Latin American military dictators who overthrew democratically elected governments and routinely tortured people were being patriotic - saving their beloved country from 'communism'."
William Blum
"Those who profess to favor freedom and yet deprecate agitation are men who want crops without plowing up the ground; they want rain without thunder and lightning. They want the ocean without the awful roar of its mighty waters.' The struggle may be a moral one, or it may be a physical one, and it may be both moral and physical, but it must be a struggle. Power concedes nothing without a demand. It never did, and it never will. Every one of us must keep demanding, keep fighting, keep thundering, keep plowing, keep speaking and keep struggling until justice is served. No justice, no peace."
Frederick Douglass (1818-1895) - African-American abolitionist, orator, writer, statesman, former slave
"An education isn't how much you have committed to memory, or even how much you know. It's being able to differentiate between what you know and what you don't."
Anatolie France
"If leisure and security were enjoyed by all alike, the great mass of human beings who are normally stupefied by poverty would become literate and would learn to think for themselves; and when once they had done this, they would sooner or later realize that the privileged minority had no function, and they would sweep it away. In the long run, a hierarchical society was only possible on the basis of poverty and ignorance."
from George Orwell's 1949 novel "1984"
"Why, of course, the people don't want war. Why would some poor slob on a farm want to risk his life in a war when the best that he can get out of it is to come back to his farm in one piece? Naturally, the common people don't want war; neither in Russia nor in England nor in America, nor for that matter in Germany. That is understood. But, after all, it is the leaders of the country who determine the policy and it is always a simple matter to drag the people along, whether it is a democracy or a fascist dictatorship or a Parliament or a Communist dictatorship.
... Voice or no voice, the people can always be brought to the bidding of the leaders. That is easy. All you have to do is to tell them they are being attacked, and denounce the pacifists for lack of patriotism and exposing the country to danger. It works the same way in any country."
Hermann Goering - Nazi leader - from Gustave Gilbert's Nuremberg Diary (1947)
"Those who can make you believe absurdities can make you commit atrocities."
Voltaire
"This is your last chance. After this, there is no turning back. You take the blue pill - the story ends, you wake up in your bed and believe whatever you want to believe. You take the red pill - you stay in Wonderland, and I show you how deep the rabbit hole goes. Remember: all I'm offering is the truth. Nothing more."
from the movie "The Matrix"
Powered by Gantry Framework